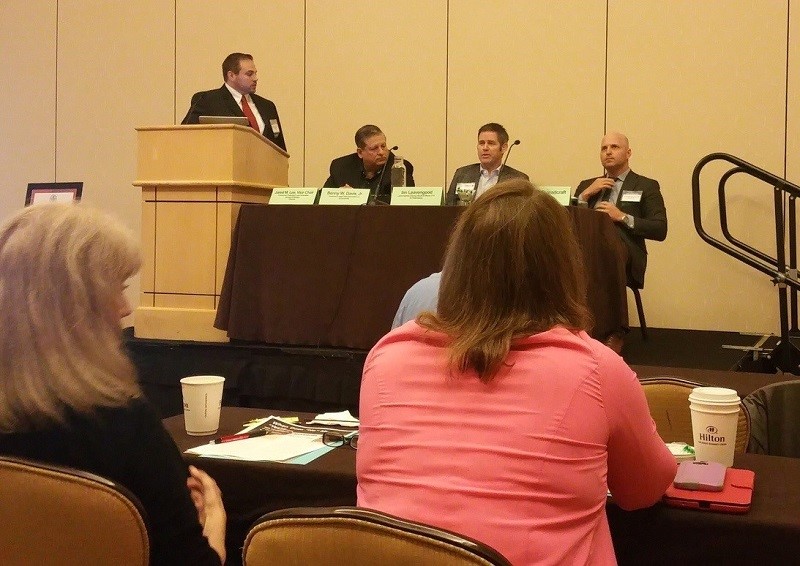 Recently, LeavenLaw partner, Ian R. Leavengood, and LeavenLaw Senior Associate, Aaron M. Swift, were asked to address members of the Florida Bar, speaking to its membership regarding Technology and Consumer Law.  Ian Leavengood sat on a panel of three persons who discussed the Telephone Consumer Protection Act (TCPA) and its development surrounding the use of automatic telephone dialing systems to place debt collection and telemarketing calls to consumers’ cellular telephones without prior express consent to do so.  Joining Mr. Leavengood on the TCPA panel were Benny Davis, principal at American Legal Claims Services, a Class Action Administration firm out of Jacksonville, FL that administers TCPA class action cases, as well as Joshua Threadcraft, a partner with Burr & Forman, LLP’s Birmingham, AL office, who represents industry in the defense of TCPA, FDCPA, and FCRA claims. On the second panel, Mr. Swift was joined by Steve Salzer of PSCU, and they discussed the Electronic Funds Transfer Act (EFTA) and the types of transactions it covers.

Aaron Swift spoke to Florida lawyers about the Electronic Funds Transfer Act (EFTA) and its application to certain transactions that affect Florida consumers.  More specifically, Mr. Swift discussed the EFTA statutory scheme which was enacted in 1978 to protect individual consumers engaging in electronic fund transfers (EFTs).  An EFT is a type of funds transfer to or from a depository account (i.e., generally either a checking or savings account) that is initiated electronically. Such transfers include, for example, ATM transactions, point-of-sale debit card transactions, and over-the-phone recurring bill payment plans. The EFTA is separate and distinct from the Truth in Lending Act (TILA) or Fair Credit Billing Act (FCBA) which generally cover credit card transactions.

Ian R. Leavengood, is the founding member and President of LeavenLaw, a consumer litigation firm that traces its roots back to 1972 in St. Petersburg, FL.  LeavenLaw and its attorneys focus on consumer protection law, including litigation under the TCPA.  LeavenLaw has sued many large bank, mortgage companies and debt collectors for unlawfully auto-dialing a consumer's cell phone without prior express consent to do so.  If you are getting robo-dialed calls to your cell phone, or spam texts, please gather evidence of such call or text (save the voicemail, take a screen shot of the text or call, write down information about the call, etc.) and call LeavenLaw to set up a free consultation.  We take TCPA cases on a contingency basis and will look forward to helping you.  www.LeavenLaw.com

Aaron M. Swift is a Senior Consumer Law Litigation Associate and a member of National Association of Consumer Advocates (NACA) and Florida Justice Association (FJA) and regularly assists clients with consumer protection litigation under the TCPA, EFTA and the Fair Credit Reporting Act (FCRA). To learn more about your rights under the Fair Credit Reporting Act, please visit our website at  www.LeavenLaw.com.